One of the first growers that Divine Fruits contacted was the Francis Family. Their farm is based in Kumbia. A modest farming family, their quality, and taste never ceases to amaze the market. The Francis family owns and operates a stone fruit farm which supplies peaches, nectarines, plums, and avocados. The farm was originally started by 1st generation farmer George Francis in 1914 for dairy purposes. His son Les Francis (2nd gen) followed his path but during the war years ventured into dry land broad acre cropping mainly focusing on navy beans.

Now Graham (3rd Generation) and his son’s Shane and Lindsay (4th Generation) run the farm. The farm would not be what it is however without their loving family; Graham’s wife Hazel, Shane’s wife Suzanne and sons Ryan and Hayden, and Lindsay’s wife Teresa and two boy’s Jordan and Nicholas. 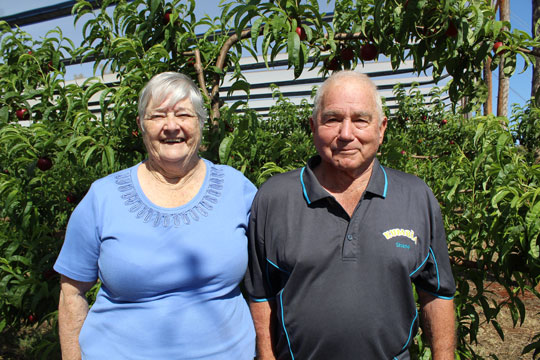 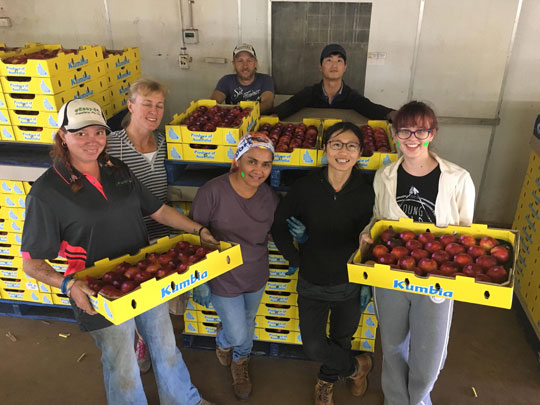 from beans to stone fruit

When Graham originally took over he continued with the dry land farming in peanuts, corn, navy beans, wheat, and barley. After a major weather change in 1982, dry land farming became tough and unsustainable. To reinvent the business they planted some stone fruit to try something new. The first trees were planted around 1987 which consisted of six to eight hundred peach trees mostly, that were varieties from Florida USA. Only about 12 people worked on the farm back then and looked after all the crop. 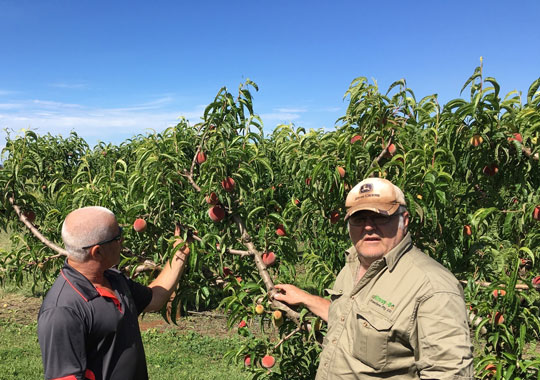 avocado’s
another success
Not long after they planted their first stone fruit trees, the Francis family tried many other varieties of fruit. Some citrus fruits, which grew well but they found it hard to compete with well-established growers. Low-chill apples, which were another unsuccessful venture but they finally found their way to avocado’s which complimented their stone fruit varieties nicely and sometimes outshines their stone fruit. 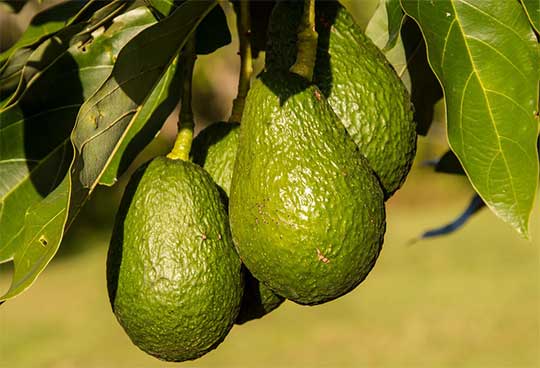 Today the Francis family has around 25,000 stone fruit trees, all palmette style (like a wall) and around 3,500 avocado trees with a computer operated irrigation system. Around picking time the Francis family will employ close to 60 people on the farm. The extra help is needed as they often pack a semi-trailer load of stone fruit a day.

Most varieties are still from California but with a couple from Spain. They grow both white and yellow flesh peaches and nectarines. Varieties such as Snow Angel, Polar Lite, White Knight and Amber Crest are just some of the types of peaches & nectarines that they grow. The selection of these low-chill varieties was due to the financial environment in the market which saw the Francis’ produce clash with many other earlier season varieties. It’s taken the Francis family years and years of trial and error to finally get to where they are now. 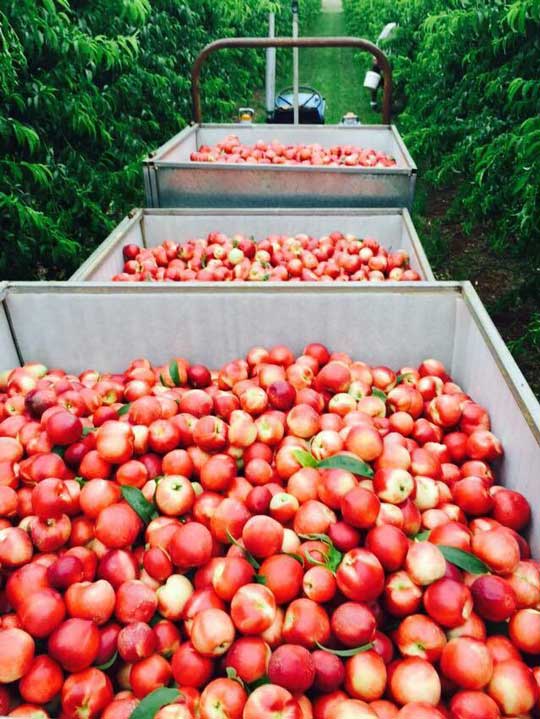 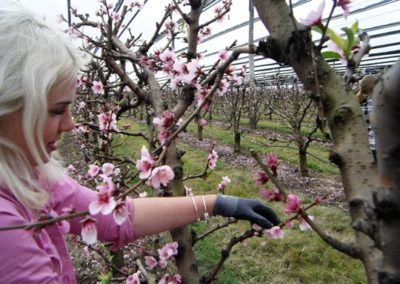 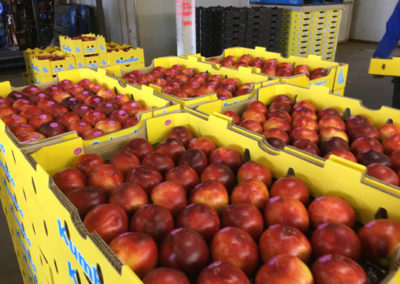 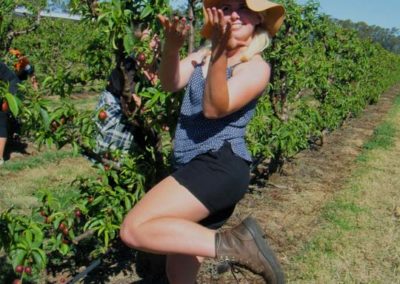 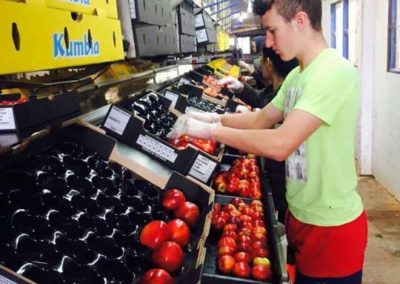 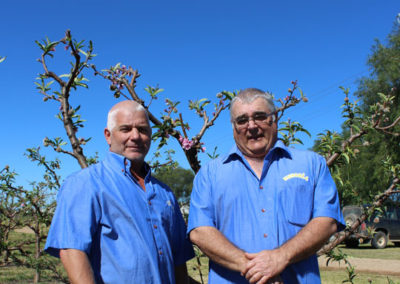 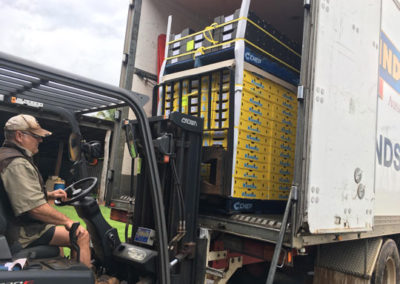 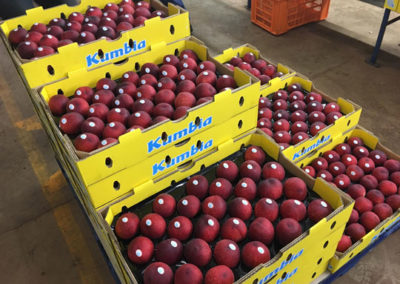 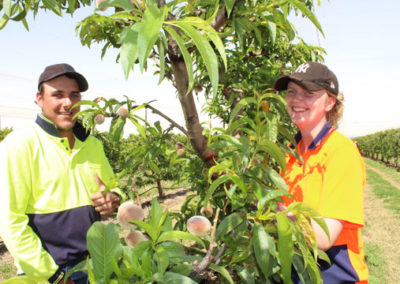 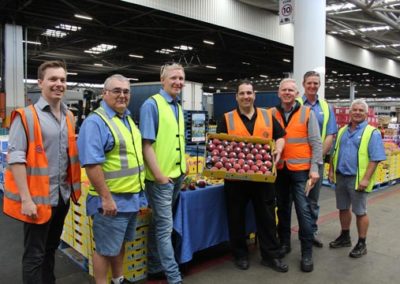 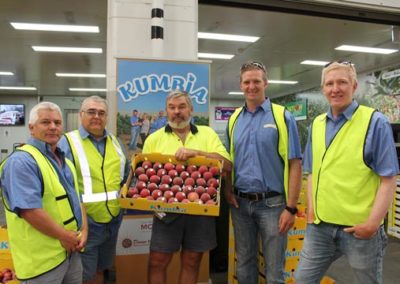 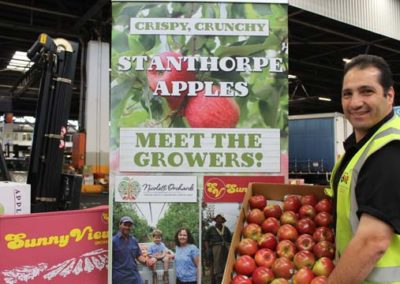 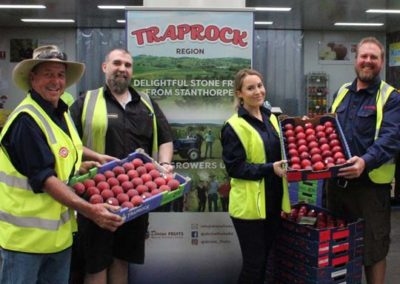 see what they say

Being a chef and owner of Moda Tapas Brasa Bar, I pride myself on working with the best local produce available. This is why I go myself to the markets each week and get to know the farmers, and families that grow some of the best in the world. Working with someone like Mira from Devine Fruits helps to bridge the gap between the venue and the growers. Creating stories with the recipes that I create helps people to connect with the food and generates lasting memories. Getting to know the farmer and being able to showcase their produce in the restaurant is so important to me. Living in Queensland we have amazing produce to work with but getting to know and support the families is so important. Mira is an amazing advocate for these farmers and growers and is so passionate about what she does, it is a real pleasure to work with her.

“It was such a pleasure to work with Mira from Divine Fruits. Her passion to share the grower’s story behind the amazing produce we enjoy as an end product is admirable. Thank you Mira for sharing your passion with us and your commitment to connecting consumers with the grower’s story.”

As a grower/supplier myself and a regular with using social media as a tool for advertising, I always love taking the time to see just what Mira and the team at Divine fruits have been up to on their Instagram account. I find Mira's work to be inspirational in sharing the grower's stories and connecting them to the public. I really enjoy seeing what other growers in around the nation stories are and different growing ideas and tips that are shared. Keep up the fantastic work!

Divine Fruits is a marketing powerhouse, they know how to spotlight a grower and their product and will connect them with the grocers and families that love what they do. Letting customers become ambassadors of their produce. It's a real pleasure to be associated with this branding.

We bought five kgs of your wonderful plums for making a family favourite, plum jam. I ate a Kaso plum first and it was certainly the sweetest, juiciest plum I have ever eaten. We always buy Australian as much as possible and certainly only Aussie for fresh fruits and vegetables.

Westridge Fruit & Vegetables has been proud to support Divine Fruits in sharing the growers' stories. We love to be able to tell and show our customers where the fruit is grown and who is growing it. We are passionate about fruit and vegetables and Divine Fruits shares this passion with us.

Thanks, Mira and her team for their outstanding efforts with connecting Growers - Retailers - Consumers.

Divine Fruits have helped provide a connection; from grower to retailer to the consumer. Our customers are now aware of the various growing regions and can see how the fruit is grown when it is in season and who is growing it. Harvest Markets Booval is very happy to support Divine Fruits and thank them for helping share the grower’s stories.

Since partnering with Divine Fruits we have noticed our local community has a better understanding of what goes into growing the fruit on the farm and what happens to get it to the shelves of the local fruit shops. Divine Fruits has helped boost the demand for Kumbia stone fruit. A WIN-WIN outcome!

Every working week in the Traprock Region brings with it different experiences. Beginning with each seasons’ pruning and flowering right through until harvest and retailing, the highs and the lows of seasonal conditions, the people involved, their passion and their experiences are captured by Divine Fruits who are able to share the story about the families with you. Once you have eaten this delicious stone fruit, following the stories on Divine Fruits will be the closest thing to being in Stanthorpe’s Traprock Region.

In December 2016 we decided to engage Mira from Divine Fruits to market our Kaso Plums brand. After attending the product launch and in-store promotions in Brisbane and on the Gold Coast, we noticed that the customers were keen to learn more about where and how our fruit is grown. Through the use of Divine Fruits social media and promotional materials in stores, our brand gained more recognition and a greater demand for the product. Mira’s idea was to make the connection to unite the fruit grower with the consumer creating amazing results. This is not only a testament to the quality of Kaso Plums but also to Mira’s ingenious marketing of our brand.

Mira has produced high-quality events namely the Guide Dogs Qld Charity Concert on the Gold Coast featuring International Pop Rock Band Herman’s Hermits. Each event was successfully carried out to plan and the feedback from guests was absolutely astounding. Mira is professional, enthusiastic and driven to deliver high standard work with the aim of fulfilling the client’s needs. She has the ability to energize the crowd with her bubbly nature and is meticulous in every aspect.

I had the pleasure of speaking at Mira’s International Women’s Day event held on the Gold Coast. Mira did such an amazing job of organizing and running the event. It was one of the most well-planned and executed events right down to the pre-work on social media and all the many other touch points were brilliant! Mira is a professional and a dream to work with.

If you would like to discuss how we can help you promote your brand, contact us now. 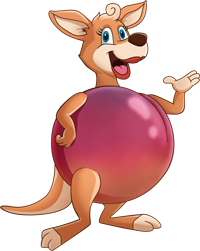